Ilfracombe got its name from a small town in Devonshire England. This little town originated in 1891 as a transport nucleus for Wellshot Station. It was the largest sheep station in the world at the time (in terms of stock numbers). The town had three hotels; each with its own dance hall, a soft drink maker, a coach builder, two general stores, a billiard saloon, a dressmaker, three commission agents, a couple of butchers, a baker and a saddler.

Another record claimed by the shire is that of the largest mob of sheep ever moved as a single flock. In 1886, a mob of 43,000 sheep moved through the area with a droving team of 27 horsemen. That doesn’t include the cooks, blacksmiths and hands which need to accompany the drovers.

Transport was once the lifeblood of the area when, long before the railway reached as far as Ilfracombe, wagons drawn by up to 30 horses and taking three months carried the wool to the nearest port of Rockhampton, 650 kilometres away. It is unlikely that any other Australian town could boast such a brilliant display of historical machinery, as does Ilfracombe. Not only that, but it’s all on public show, with antique machinery and farm equipment lining the entry road to the town as part of the Ilfracombe Machinery and Heritage Museum, otherwise known as The Great Machinery Mile.

Nowadays Ilfracombe is a small Outback Queensland township surrounded by large grazing properties. There are just 350 people living in a shire which covers 6,500 square kilometres. It is located 27 kilometres east of Longreach and 80 kilometres west of Barcaldine.

Make sure you visit the iconic Wellshot Hotel on your visit. The hotel is over 100 years old and is considered one of the most unique and historic pubs in the Outback. 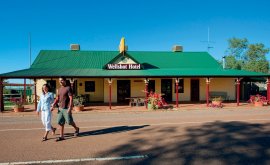 Explore Longreach & Winton's attractions on our popular Longreach Outback Getaway. This tour can be packaged with rail or flights from Brisbane. The ideal short break in Outback Queensland, this tour takes in Queensland’s heartland towns of Longreach & Winton featuring four nights in Longreach, a ...

Explore Longreach & Winton's attractions on an unforgettable 5-7 day Longreach Outback Getaway with our Off-Peak Deals. The ideal short break in Outback Queensland, this tour takes in Queensland’s heartland towns of Longreach & Winton featuring four nights in Longreach, a day tour to Winton and a...

Explore Longreach & Winton's attractions on an unforgettable 5-7 day Longreach Outback Getaway. The ideal short break in Outback Queensland, this tour takes in Queensland’s heartland towns of Longreach & Winton featuring four nights in Longreach, a day tour to Winton and all of the top Longreach ...

With over 30 years experience in crafting authentic outback tours, you’re assured of a memorable and highly personalised touring holiday with Outback Aussie Tours.